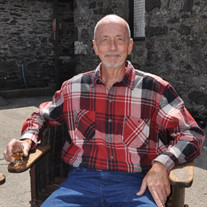 Richard Edward Snow, born in Angola, Indiana, October 18, 1953, was the youngest of three children of James and Marilyn (Applegate) Snow. His sister Judy remembers their mother held him up to the hospital window so the other children could see him the day he was born. Passed away surrounded by family in Wilton, California, at age 66, August 14, 2020 after a brief struggle with cancer. Son of a minister, the family moved from Indiana to Oklahoma before settling in Sacramento in the 1960s. Rick graduated from C.K. McClatchy High School (1971), attended Pasadena College and graduated from Sacramento State College. He was a member of the First Church of the Nazarene where his father had been pastor. Rick retired in 2008 after a 35-year career with the State of California in computer programming. In retirement, he had his morning coffee while working the crossword puzzle. Enjoyed trips to the Bay Area with friends, and wine tasting in the foothills and Lodi. He was a season ticketholder and fan of the SF 49ers, NHL Sharks, Sacramento Kings and the SF Giants. His favorite places to vacation were Kona, Hawaii, and Islay, Scotland. He played the piano, banjo and ukulele and was talented at BBQing, fishing, 1,000-piece puzzles and golf. Walked 15,000 Fitbit steps a day. Rick coached his son’s basketball, little league and soccer teams. Lately he sat on the farm, watching his chickens & sheep while enjoying a glass of good Scotch whisky. Predeceased by parents James (1973) and Marilyn (2014). Survived by wife of 40 years, Dona. Also survived by son Michael Snow and his wife Christine, grandsons, Matthew, Nathan and Brennen; brother Jim Snow (Kathy), sister Judy Anderson (Dave) and was the Favorite Uncle to many nieces and nephews. He will be remembered by lifelong friends, Jeff, Bob, Gary, Richie, Phil and Shane, and all others who knew him and loved him. Taken too young, with many places still to visit and family & friends still to enjoy. The family thanks the Kaiser Hospice medical team for their excellent care and kindness during his illness. A special thanks to the Murray Family Funeral Chapel of Rocklin for their support and guidance at this time. Any services will be private due to the Covid-19 restrictions. Rick would want you to enjoy a good whisky (or the drink of your choice) in his honor.

Richard Edward Snow, born in Angola, Indiana, October 18, 1953, was the youngest of three children of James and Marilyn (Applegate) Snow. His sister Judy remembers their mother held him up to the hospital window so the other children could see... View Obituary & Service Information

The family of Richard Edward Snow created this Life Tributes page to make it easy to share your memories.