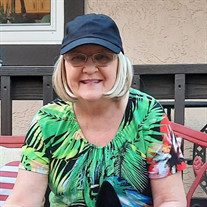 Mary Ann Meredith (Knutson) November 14, 1949 – April 15, 2022 Mary Ann Meredith passed away on Good Friday, April 15, 2022, following a battle with brain cancer. She was 72 years old. Born in Turlock, California on November 14, 1949, to Arthur and Mary Knutson, Mary Ann was the youngest of four children. She lived in Patterson, California until the 3rd grade, them moved to Indio, California for 2 years. The Knutson family eventually settled in Running Springs, California, where Mary Ann attended Running Springs Elementary School and Rim of the World High School, where she met her future husband, Jim Meredith. They were married September 26, 1970. Mary Ann attended California Lutheran University, where she studied for two years and spent a semester abroad in Salzburg, Austria, before completing her Bachelor of Arts degree at the University of Redlands. She also obtained her secondary teaching credential with an emphasis in Physical Education and German through UC Berkeley in 1973. In 1980, Mary Ann and Jim had their only child, Erin. They moved from the SF Bay area to Penryn in 1981, and despite their initial worries that it was “too far out,” they became accustomed to the country life, staying there for nearly 20 years. During that time, Mary Ann became a frequent classroom volunteer at Penryn Elementary school, served on the school board, and volunteered with the Penryn Friends of the Library. She and Jim “downsized” to Rocklin around 2000, where they made many friends through the Sunset Whitney Country Club and hosted infamous Rocklin Jubilee parties in their flamingo-filled back yard. She also assisted Jim in his property management company until his retirement. Following Jim’s death in 2011, Mary Ann moved to Loomis and found great joy in being “Meemaw” to her two grandchildren, Ryan and Reagan, who lived next door. Mary Ann was a planner in all aspects of life and was known for her positive attitude whether the plans went as expected (as they usually did!) or not. She was very creative, enjoyed entertaining friends and family, and loved going shopping. Whether it was items for the grandkids or a particular accessory she envisioned to decorate her home, Mary Ann always seemed to find a deal she couldn’t refuse. She also loved to travel and took many trips and cruises around the world with her family and friends – it is said she never missed an art auction or a meal. One of her favorite destinations was shopping on Front Street in Lahaina, Maui, where she knew exactly how and where to get free parking. A lover of all animals, Mary Ann was particularly fond of her cats, many of whom showed up hungry at her doorstep and quickly became permanent residents. Mary Ann is survived by daughter Erin (Jeff Rodzen), grandchildren Ryan and Reagan, brother Chuck Knutson (Bellory) of Sacramento, sister Winnie Wilson (Don) of Roseville, and numerous nieces and nephews. Mary Ann is preceded in death by her husband Jim Meredith, her parents, and sister Diana McCoy (Jim, also deceased). A memorial at the Newcastle Cemetery (850 Taylor Rd. Newcastle, CA 95658) will be held on Thursday, May 19th at 11:00AM. In lieu of flowers, please consider donations to the American Cancer Society or American River Hospice.

The family of Mary Ann Meredith created this Life Tributes page to make it easy to share your memories.