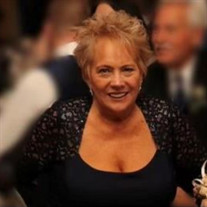 Gail Higgins Martha Gail Higgins was surrounded by her husband, daughter and granddaughter when she joined Jesus on December 29, 2021. Gail was born in Lake Charles, Louisiana on October 17, 1951 to Edwin and Bert S. Muse. She grew up in Waco, Texas and then moved to Longmont, Colorado where she graduated from high school and attended beauty school. Gail worked as a dental assistant for several years. Her love of travel drew her to a new career. She became a travel agent and later a customer service agent for the airlines. Gail was able to travel all over the world often with family and friends. She did not stay in one place for very long. She met the love of her life Terry Higgins on a blind date in 1969. He swept her off her feet and they married June 25, 1971 while he was in the Navy, they later had three children. Gail was a devoted wife, a dedicated mother, an adoring Nana, and a generous friend. She never met a stranger. Gail’s smile lit up the room and her joy of life was felt by all who knew her. Her love for her family and friends was felt deeply. Gail’s greatest joy was becoming a Nana. She loved spending any free time with her eight grandchildren. She spent many hours watching sporting events, performances, completing puzzles, playing canasta, and just being with the grandkids. Gail is survived and missed by her husband Terry Higgins of Pioneer, CA. Her children: Kymberly (Dennis) Sindelar of Rocklin, CA; Keith (Kerri) Higgins of Gilbert, AZ; and Kynsey (Mike) Yaksitch of Placerville, CA. She was a cherished Nana to Madilyn, Isabella and Logan Sindelar; Maguire, Kennedy and Blake Higgins; Lundyn Farr and Braden Yaksitch. She is also survived by her sister Robin Muse of Fort Collins, CO. Gail was preceded in death by her mother, father, mother-in-law, father-in-law, brother-in-law, and nephew.

Gail Higgins Martha Gail Higgins was surrounded by her husband, daughter and granddaughter when she joined Jesus on December 29, 2021. Gail was born in Lake Charles, Louisiana on October 17, 1951 to Edwin and Bert S. Muse. She grew up in Waco,... View Obituary & Service Information

The family of Martha Gail Higgins created this Life Tributes page to make it easy to share your memories.

Martha Gail Higgins was surrounded by her husband,...