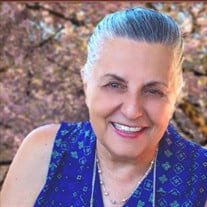 Maria Jule Bruno ( also known as Myra and MyMy) was Born February 1, 1929 in her mother's home in Brooklyn New York. She was the daughter of the late Josephine Chiavetta and Joseph Strano. Maria, a 21-year resident of Rocklin, California, passed away on March 31, 2021 with her family by her side. After graduating high school in New York, Myra attended The Brooklyn School of Nursing where she earned her Nursing degree. Myra received may accolades for her outstanding academic performance as well as her clinical skills. Myra’s gift of compassion and empathy helped her heal many patients both in New York and California. As if going through Nursing School while working at a TB hospital was not enough, Myra also became one of the first female Lifeguards at Coney Island Beach, NY. She was a fantastic swimmer and loved the ocean. The movie industry sought her out to be in a movie to swim with Ester Williams, but her mother said, “No”. So thankfully, Myra continued to focus on Nursing. In 1957, Myra moved from New York to Saratoga California. While taking a friend to a Podiatry appointment, she met her friends' doctor, Frank Bruno. They quickly fell in love and within a couple months of dating, Frank and Myra were married at Sacred Heart Church in Saratoga, California on July 21, 1957. Myra will be dearly missed by her surviving husband of 63 years, Dr. Frank Bruno Myra was Blessed with a family who adored her. In the first 3 years of marriage, they had 3 children, and the 4th came along 11 years after the first. Robert (Patricia) Bruno; Deborah (Roc) Murray; Venise (Matthew) Taaffe; and the youngest, Frank Bruno. In the last 35 years, Myra’s life revolved around her Grandchildren and Great Grandchildren. Michael (Noelle) Murray, Scott (Olivia) Murray, Megan Taaffe, and her two great grandchildren Maddison Murray and Miles Murray. She was also loved by her special niece, Tara Scaduto, who she helped raise for several years. The are many other cousins, nieces, nephews and in-laws who she loved, and they loved her. Myra devoted much of her time to caring for her family. She was selfless. She instilled values in her children including hard work, caring, kindness, honesty and humility. Myra was always proud of her children’s accomplishments, but ultimately, she just wanted them to all be happy. She had a special place in her heart for her 2 son-in-law's Roc and Matt. They loved her unconditionally. Myra always put others first, and shared her generosity with anyone in need. She had the uncanny ability to reach people in a positive way. Myra always looked for the good in people, and found it. The most often used comment about Myra is, “She is one in a million”. Any time people got to spend with her, always felt like a Blessing. Her skills were many, but Myra was best known for her artistic abilities, especially in the world of needle arts in which she earned a Mastery Degree. Secondly, she was known for her incredible ability to make delicious food. She always made everyone’s “favorite” dish, because she loved to serve and make people happy. Never would you come to the house and not smell something fantastic cooking. The next thing you would hear was, “Mangia”. At which point you would sit down to enough food to feed an army. She truly took joy in seeing people enjoy the meal, but mostly loved the company while sitting around the table together. If not found working on one of her art pieces or cooking, Myra would often be found on the phone talking to her loved ones. Her New York cousins Kathi and Yolaine would talk till 2 in the morning like it was the middle of the day. Myra would have a way of consoling and advising by just saying what was in her heart. This would not be complete without mentioning Myra’s love of animals. Our family home in Saratoga was a mini farm with chickens, roosters, ducks, cockatiels, parrots, chinchillas, turtles, and of course her beloved dogs. There were always 2-3 dogs at all times, that were treated with kindness and respect. It is comforting to know, she is now with her loved ones that have passed, and her dogs in heaven. Myra will be remembered and loved by many, and will be in our hearts forever. There will be a Catholic Mass service for Myra on Friday, April 9th at 4:00pm at Saints Peter & Paul Church, Located at 4450 Granite Drive, Rocklin, CA. There will be a reception at her daughters' home in Rocklin, following the service. Myra will be laid to rest at Madronia Cemetery, Saratoga California, at a later date.

Maria Jule Bruno ( also known as Myra and MyMy) was Born February 1, 1929 in her mother's home in Brooklyn New York. She was the daughter of the late Josephine Chiavetta and Joseph Strano. Maria, a 21-year resident of Rocklin, California, passed... View Obituary & Service Information

Please let the family know if you are planning on attending the mass, as the church will need a count of those attending. Thank You and Bless You.