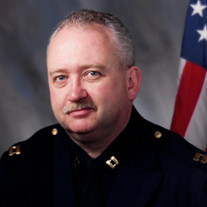 Leonard Lee Wilson September 22, 1961 - November 19, 2020 Rocklin, California Born in Bakersfield, CA to Frank and Jacqueline Wilson Leonard served in the U. S. Air Force for 4 years, stationed at Travis Air Force Base, with an Honorable Discharge. He worked for the Salinas, CA Police Force for 20 years; he was the Sergeant of the Gang Unit for several years. He worked very hard and became Captain in the Salinas Police Department, at a young age for such a high rank Leonard attended and graduated from the FBI Academy in Quantico, VA, he also earned his Master’s Degree in Behavioral Science while working full time as a Police Officer. Leonard played baseball for many, many years from high school and on the Police City League as an adult. He also coached the PAL (Police Activity League) baseball in Salinas for a few years, he loved baseball and was an avid LA Dodgers fan He was also a huge fan of the Oakland (now Las Vegas) Raiders. Leonard enjoyed a friendly game of poker at home with his Buddies - he had a great poker face! He moved to Rocklin and was most recently the Executive Director of Thunder Valley Casino Resort, for 9 years He taught Administration of Justice at Sierra College here in Rocklin for several years Leonard was well-liked and respected by anyone who crossed his path. He was known for his quick-wit, his infectious smile, and his kind and compassionate spirit. Leonard was preceded in death by his father, Frank, his mother, Jacqueline, and his sister, Leah. He is survived by his loving wife, Asa, in-laws John and Hazel, sisters-in-law Teri, Jamie (Rick), and Rose, brother-in-law, Adam, and his sister, Lydia. He will be deeply missed and will live forever locked safe within our hearts. The family is holding a private Service in Rocklin, CA on December 5, 2020.

The family of Leonard Lee Wilson created this Life Tributes page to make it easy to share your memories.