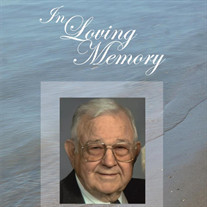 IN LOVING MEMORY Francis “Frank” Irwin Watkins, age 98, returned to God on January 28, 2022 at his home in Rocklin, California. He was born on April 9, 1923 in Abbeville, Louisiana; one of four children to Frank Watkins and Lillian Marie Zeringue of Abbeville, Louisiana. He is preceded in death by his parents and his brothers Raymond and Frank Watkins and his wife Patricia Watkins. A Navy family they lived in Honolulu, Hawaii during the bombing of Pearl Harbor in 1941. His father was a electrician on submarines and ships for both World War I and II. After Frank's brother Raymond was killed in an air mission over north Africa, he entered the Navy 1943 at age 20, and became an aircraft mechanic throughout the remainder of the war. During WWII in New Orleans, he was set up on a blind date, where met his future wife, Patrica Grilletta. They corresponded throughout the war and later married in 1945 in Long Beach, California. Together with his soulmate, he raised four children in San Jose, California. His parents retired to a small farm in Fontana, California. It was there where Frank developed a lifelong love for farming, and growing fruit trees. Years later when he retired to his own little farm in Grass Valley, California, he made his own wine. He received his mechanical engineering degree from UC Berkeley in 1952 and afterwards took a job with DuPont in Orange, Texas. From here Dupont trained him for a short period in Wilmington, Delaware before being assigned to a new plant in Waverly, Tennessee. In 1959 friends of his from his military years, the Miller brothers, offered him a position at Raytheon in California. This was his introduction to the remainder of his career of Silicon Valley and the semiconductor industry. Frank and Pat, retired to Grass Valley, California. There they became an active members of Saint Patrick's Catholic Church. Ever since moving to California in 1959 they were avid square-dancers and formed many enduring friendships. As a testament to their love for one another, Frank and Pat celebrated their 75th wedding anniversary on October 17, 2020. Frank loved his family and that love was felt by all. He will be fondly missed by his sister Vivian Selvo of Johnson City, Tennessee his loving children, Marsha and Raymond Watkins of Lincoln, CA and Michael Watkins of Rome, Italy. She is preceded in death by his loving wife Patrica Grilletta, who passed a little over a year ago. They had been the longest living residents at their Senior Living Community. He will be lovingly remembered by his five grandchildren, Charles Washburn, Chris Watkins, Stephanie Watkins, Eddie Huestis, Claire Marie Huestis, and her eight great grandchildren, Lauren Washburn, Jennifer Washburn, Austin Watkins, Brady Watkins, Blake Watkins, Elliot Huestis, Emmett Huestis and Easton Huestis. There will be a Celebration of Life service on February 7, 2022 held at 1:00 pm. He will be laid to rest, reunited with his loving wife at Rocklin Cemetery 4090 Kannansto St, Rocklin CA. 95677 Grave 95-96.

IN LOVING MEMORY Francis &#8220;Frank&#8221; Irwin Watkins, age 98, returned to God on January 28, 2022 at his home in Rocklin, California. He was born on April 9, 1923 in Abbeville, Louisiana; one of four children to Frank Watkins and Lillian... View Obituary & Service Information

The family of Francis "Frank" Irwin Watkins created this Life Tributes page to make it easy to share your memories.